… With A Real Rock

If you’ve been following along with us here, you’ve probably noticed that, on occasion, Your Friendly Neighborhood Amoeba’s labors, or his anxieties, keep him up all night. And how, on such occasions, Quilly may offer to rock him to sleep. With a real rock.

Ah, if she only knew.

There is, in fact, no shortage of rocks on the Hawai‘ian Islands. But they tend to come in only two kinds. Volcanic basalt, typically black or rust-colored, and coral, typically white. Graffiti on Hawai‘i Island’s Kona coast means doing your tagging in white coral on black lava flows.

You didn’t believe me, did you? See what you get when that happens?

Thing is, that coral rock only turns white after it’s been washed up on the beach and set in the sun for awhile. While it’s still underwater, it’s usually anything but white. Live coral, of course, still has coral animals on it, and they usually cover the rock part in brilliant colors, so that no white shows. 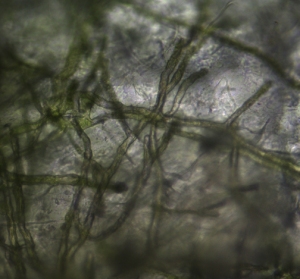 And after the coral animals die, the rock they leave behind still isn’t usually white. In fact, it fairly quickly turns green, usually.

Because the algae take over. Not only on the rock but in it.

The picture at left shows some of these algae as they appear actually inside the rock. To give you some idea of scale, the filaments are about half as wide as a typical human hair. The picture below it shows the same alga as it appears growing in a Petri dish. The rock it was in was invited to leave, and accepted the invitation, having seen what happened to the one that was sacrificed so that the first picture could be taken. That sacrifice was based on the laws of optics, which state that microscopes can’t see through objects much thicker than flat sand grains, and the laws of classical mechanics, which state that the head of a sledge hammer accelerated through a piece of coral rock will beget sand grains.

The alga does have a name. We think; more on this in a minute. Naturally, that name isn’t anything simple like “Fred” or even “Tebucky“. It’s Phaeophila dendroides, which means something like “branched shade-lover”.

So does all this mean anything, except to prove that certain Amoebae have rocks on the brain? Well, planet Earth has a whole lot of coral rock lying around, most of which has these algae in it. These algae get into the rock by dissolving bore holes into it with acid. This, of course, dissolves the coral, which consists almost entirely of the mineral calcium carbonate.

And its possible that, as global temperatures and atmospheric carbon dioxide levels rise, these algae will grow faster and release even more carbon dioxide into the atmosphere.

The scale of the contribution that these rock-boring algae may make to global-warming-mediated climate change is unknown, because, by and large, we know little more about them than that they exist, and that there’s a whole lot of them out there. Which is why I have a lab with people in it who are smashing coral rock into flat sand grains, so we can start doing experiments to find out just what the heck is going on here.

We’re not even sure about that fancy name. The algae that go by the name of Phaeophila dendroides are found literally all over the world, from the North Sea to Antarctica and everyplace in between. But even though they all look alike, they do not act alike. They act, in fact, as if there’s, not one, but several different kinds (“species”) out there.

Therefore, about two hours ago when I started to put this post together, I was sitting in front of a map, trying to work out which population of these algae belonged to which part of the world, and what name should be assigned to each population. Assuming the next rounds of experiments confirm that these namable populations exist. Of such questions and deliberations is my professional life made.

Maybe Quilly did try to rock me to sleep with a real rock, and I never noticed …

– O Ceallaigh
Copyright © 2009 Felloffatruck Publications. All wrongs deplored.
All opinions are mine as a private citizen.