Originally posted by O Ceallaigh on the discontinued blog Felloffatruck Publications, 12 January 2007. Reposted here with updated links in support of a retrospective currently ongoing at the Dude & Dude site. 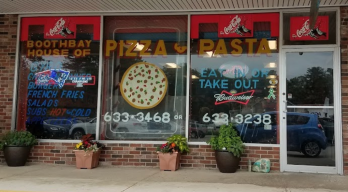 Here I am again at the Boothbay Harbor House of Pizza, scarfing lunch while I’m waiting for my clothes to dry. Maybe I should make a regular weekly series out of this. Except that my house is finally going to be ready for occupancy next week, so I’ll be able to do clothes at home like the American Dream says you ought.

That’s too bad, in a way, because, as a colleague said as he passed by my table (a picnic bench with a cheap vinyl-covered tablecloth), the Boothbay House of Pizza “is where the elite greet and meet.” The Cosmopolitan Club it ain’t. But it suits the town, and it suits me.

I will miss my weekly greetings with Mark, and Joanne, and the daughter who was a plump little kid until somebody waved a wand at Thanksgiving and turned her into a bombshell.

I will miss the bulletin board with the hand-printed promos for the 50-seat uniplex movie theatre, the handyman ads with their tearaway tabs bearing the phone number, the photos of the school and Little League sports teams, sponsored of course by my weekly pizza.

And I will miss the local weekly paper, the Coastal Journal, available for free from the rack at the counter.

The people that have been putting me up while the house in Damariscotta Mills is being made habitable subscribe to the Wall Street Journal. Have I mentioned that the gentleman of the house is a world-famous biological oceanographer, and I am not worthy to carry his firewood? I’ll tell you more about it sometime.

The Wall Street Journal has page after page of concerts, plays, and shows of art and fashion, all solemnly and scrupulously reviewed, all intended for those whose future prospects in the halls of commerce depend on their ability to demonstrate mastery of their means.

The Coastal Journal has a notice that the local library is showing a vintage movie. A $5 donation will help maintain and expand your library’s classic film collection.

The movie is the 1930 classic, All Quiet on the Western Front. Perhaps the greatest anti-war movie ever made. A movie that, says the notice, “now … has an ominous and depressing timeliness, with the cream of American youth, the best military in the world, being killed and maimed in an unfortunate and, many believe, unnecessary war in the middle east.”

The notice is next to another one, tracking the travels of a children’s tapestry that is being used to promote the creation of a new Cabinet office, the Department of Peace and Nonviolence, “for which legislation is currently pending in Congress.”

The local paper almost seems surprised that history has echoes of America’s current war weariness. “After four years of failure … [we] demand that immediate efforts be made for a cessation of hostilities …” While, meanwhile, the President is calling for more troops, and proclaiming “We accepted this war for [this] worthy object … and the war will end when that object is attained. Under God, I hope it never will until that time.”

Lincoln. (“Collected Works”, volume VII, pp. 394-95.) Who expected to lose the 1864 elections to a Democratic party who made the “After four years of failure …” statement a crucial part of their platform.

We have forgotten that the flood of casualties during the campaigns of 1864 drained the morale of the folks back home. When, during the major battles, more Union soldiers lost their lives in a week than have been lost in four years in Iraq, without tangible results, without cracking the Confederate resistance.

We have forgotten that the songs changed in 1864, from the brazen patriotism of the Battle Cry of Freedom, and the solemn exhortation of the Battle Hymn of the Republic, to the despondency of Tenting on the Old Camp Ground:

The songs, and the books, and the films, are there to remind us of the immediate wreck and ultimate futility of war, of human conflict. Such remembering, we are told, is a prime function of the arts …

Another story in the Coastal Journal tells of the impending closure of a local arts center. After eighteen years, its expenses have far exceeded its revenues, and without one or more major donors and renewed patronage, it cannot survive. Its director glooms that American culture as a whole does not consider the arts as a priority. If, on the other hand, she says, the center were involved in sports …

“And now, ladies and gentlemen, the Class C 2006 Regional Championship Semi-finalists, your Boothbay Fighting Seahawks! Welcome them as they prepare to do basketball battle with their arch-rivals, the Lincoln Academy Eagles!! Let’s hear it for your Seahawks! Are you ready to RUUMMMMBLLLE!!!!”

We’ve been fighting today on the old camp ground,
Many are lying near;
Some are dead and some are dying,
Many are in tears.

– O Ceallaigh
Copyright © 2007 Felloffatruck Publications. All wrongs deplored.
All opinions are mine as a private citizen.