The Quiet Waters By – As Named In Maine

Originally posted by O Ceallaigh on the discontinued blog Felloffatruck Publications, 31 January 2007. Reposted here in support of a retrospective currently ongoing at the Dude & Dude site.

When you live in an out-of-the-way place like Maine, you see things, every once in awhile, that you know they’d never get away with in civilization.

For instance. Here I am, innocently driving down the street, concentrating on making sure that I wind up at work instead in the harbor, ’cause I just moved into town and I’m still trying to find my way around. And a truck appears, going the other way. Perfectly ordinary truck, I think. You stay in your lane, pal, I’ll stay in mine, and all will be well.

Then I see the name on the side of the truck. In the most boring font you can imagine.

Hel-lo? I’m surprised I can hear the truck over the accumulated voices of the Madison Avenue types who’ve seen it.

“Dead River Company?!? You guys nuts or something? What do you do, pollute waterways for a living? Produce stinking brews with corpses floating in it? Houston, we have an image problem. Yes I know this is Maine and that’s what you do with rivers. But you don’t have to announce it to everybody! You want to make a killing, not be a killing. Call your business Living River Company or something. ‘Course then they’d think you sold Bibles.

“And lose that font. You want people to think you’re a cheap plastic toy made in Japan in 1955??” [2022 Update: They did. So well, in fact, that half an hour of websearching yielded no examples of what was on their trucks when this post was written.]

Naturally, I’m intrigued. For one thing, I’d like to know more about a company that has so conspicuously flaunted the spin doctors and lived to tell about it. For another, I’d like to find out what the hell a dead river has to do with the heating oil this company is selling.

So I do what any sensible research-oriented person does in this day and age. I go online. Tell me you haven’t heard that line before on the blogosphere. Or anywhere else these days. Come on. Books? Journals? Paper?? You gotta be kidding.

Anyway. I find out that the Dead River Company began life in the early 20th century as a bunch of loggers. The heating oil business sprang up from the part of the original business that procured fuel for its logging operations. Gave the outfit something to do when the last logs left Maine in the 1920s. The company name commemorated where they first set up shop. 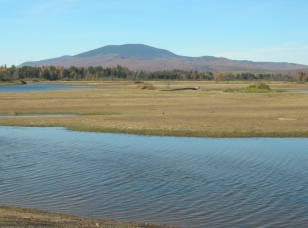 Yes, there really is a Dead River in Maine. Two of them, in fact. This is not unusual; there are like seventeen Ram Islands. Name fits a place, a Mainer’s going to use it, and who cares if it’s already been used someplace else?

And why, you ask … You didn’t? Too late. I asked for you. Remember, it’s easier to get forgiveness than permission. As I was saying. Why, you ask, would anyone wish to set up shop besides a dead river? Wouldn’t you get sick and tired of holding your nose all the time?

Not really. At least, not originally. Later on, there were plenty of stinky rivers in Maine. Not so much now, though the rivers are still littered with corpses. The corpses of the businesses that died because it cost them too much to have to clean up their waste products. But that’s a tale for another time.

No, a Dead River isn’t that kind of dead. In fact it’s usually teeming with life. Or it was before humans of European descent got their discharge pipes into it. The key to the story appears a couple of inches up and to the left on the map of Maine. Where one finds the Swift River. Rivers, actually – I think there are three of them. Not counting the ones in New Hampshire. A Swift River is tumbling madly from the mountains to the sea. A Dead River isn’t. It’s not going anywhere in any kind of hurry. Kinda quiet and peaceful, really. Still, even. Nothing grave about it.

No Mainer had anything to do with the King James Translation of the Bible into English. Naturally, since the King James was published a few years before there were any European types in Maine. It’s just as well.